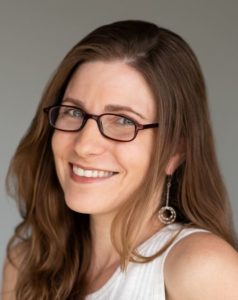 Karen Macklin is an award-winning multi-genre writer. She has been published and produced professionally as a journalist, essayist, playwright, and author of creative nonfiction. Her articles have been published across the country in more than a dozen newspapers and magazines, including The New York Times, Yoga Journal, and San Francisco Weekly. Her plays—which include Lotus in the Fire, Popping the Cherry, Mister President, Stranger in a Stranger Land, and Commit Me to Memory—have received readings and/or productions in New York City, San Francisco, Seattle, and Italy. Her poetry has appeared in various journals, and she co-authored the book Indie Girl. She currently writes the column Examined Life for 48 Hills.

She earned a BA in English from State University of New York at Albany, and a MA in English and MFA in Creative Writing, both from San Francisco State University. She’s lived and traveled all over the world for exploration, volunteer work, and paid work, and spent a year in Guatemala City on a State Department fellowship teaching journalism.

Her work is influenced most by the urban places she’s inhabited, the years she’s spent traveling abroad, a deep love of language, and Eastern philosophy & spirituality.